April is Autism Awareness Month. I’m aware of autism every day because I have a 13-year-old son on the autism spectrum.

He was diagnosed when he was in kindergarten. The teacher, a woman who’d been in the profession for 25 years, contacted me about excessive verbal outbursts. He would just shout out random sounds throughout the day – kind of like Tourette’s but with no profanity.

I scheduled a private psychological evaluation for him after these concerns were raised because they told me it might take a while to get it done through the school. Fortunately, our insurance covered it. After two 3-hour sessions of testing, the psychologist concluded the he had PDD-NOS. This is a no-longer-used diagnosis that stands for pervasive developmental delay – not otherwise specified. General autism spectrum.

A diagnosis of autism will throw you for a loop for a while. He was very verbal, had hit all of his other developmental milestones on target, I’d taken him to all his pediatrician appointments, he went to preschool with no issues. I didn’t understand, and as his mother, I made it my mission to ‘fix’ him.

The school IEP (individualized education plan) was set up and implemented. Speech therapy commenced to try to stop the outbursts. I learned he had some motor skills delays, so I set up physical and occupational therapies for him. He used the ILS (integrated listening system) for a while. He saw the psychologist weekly. He did aquatic physical therapy. He was part of a social skills group with other special needs kids that was a disaster for him.

You get the idea.

This went on for three years. I read everything I could get my hands on and dragged that poor kid to doctors and therapists and specialists. I took him to a naturopath where they took ten vials of blood out of his little arm and informed me he had ‘sensitivities’ to a bajillion foods. He was evaluated top to bottom and everything in between because by God, we were gonna fix this!

And then, like Forrest Gump, for no particular reason at all, I just accepted my child the way he was. He is who he is. He will be who he will be. What I do or don’t do will certainly have some effect on him, but he doesn’t need to be ‘fixed.’

He is now a 7th-grader at a fantastic middle school, he participates in ABA (applied behavior analysis) therapy, goes to a social group that works, has a home ABA tutor, and has made tremendous progress in the past 18 months.

He loves to write and generates copious amounts of pages with words and ideas all over them. He’s the one who gave me name of this blog. I found this paper on his floor one afternoon, and it resonated with me. 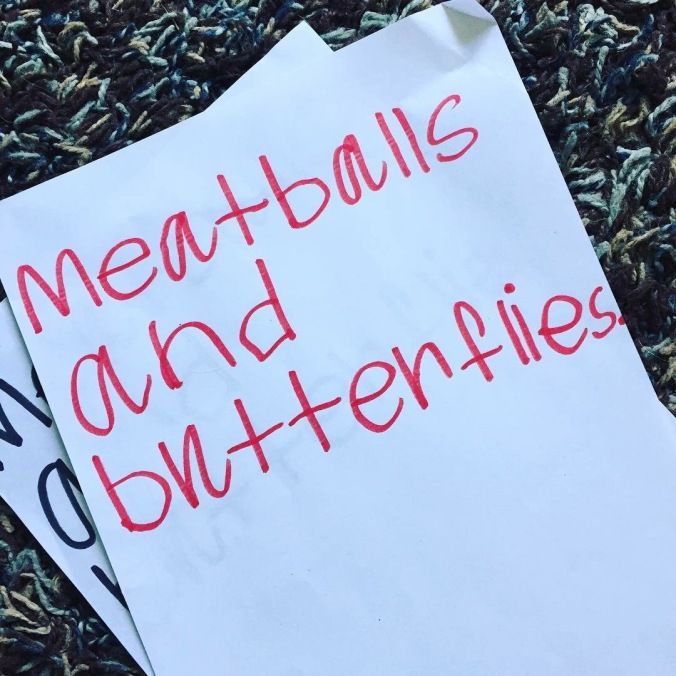 But meatballs are delicious.